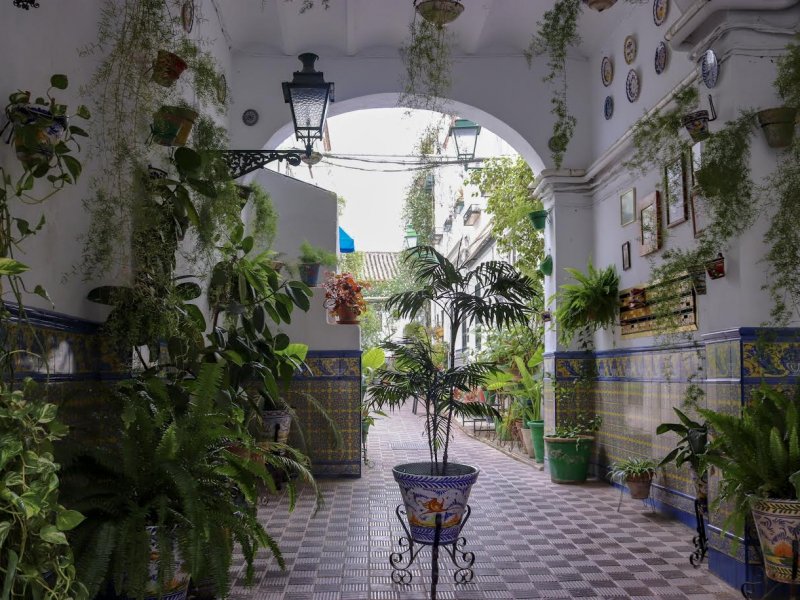 Sevilla has the light and the atmosphere that make it special. Its avenues and historic buildings, parks and palaces, the Guadalquivir river and its bridges are incomparable. The life in Sevilla is famous for its joy, festive spirit and colours. Sevillan neighborhoods have their own personality, but there is one the most typically Andalusian: the neighborhood or Barrio de Santa Cruz. Just take a stroll through its labyrinth streets with orange trees, barred windows and flowery patios. Many centuries ago, the Jewish community lived there and today visitors from all over the world come to see it. For an amazing stay in Sevilla we offer you the most elegant Luxury Apartments that we have distributed throughout the city so you can enjoy comfort, design and security that BE APARTMENT provides you.

Barrio de Santa Cruz has an immense historical heritage together with hundreds of tapas bars, souvenir shops and flamenco tablaos for locals and visitors. It is a show just walking through its narrow streets and alleys. Here are some of the famous palces you can visit in the gorgeous Santa Cruz neighborhood in Sevilla:

The Gothic Cathedral stands on the site occupied by the great Almohad mosque, from where stands out its minaret, la Giralda, Christianized in Renaissance style. It is one of the most visited religious monuments in Spain.

The Archivo de Indias, built by Juan de Herrera who also "signed" El Escorial. To build it, the structure of an existing market was used. In 1785, by order of Carlos III, it became the documentary and testimonial headquarters of the archive of Spain in America. There are 86 million manuscripts and 8,000 maps, among them singular pieces used by Colón, Hernán Cortés and Cervantes.

The Reales Alcázares consist of a palatial complex created initially by Pedro I in 1364 and later extended successively by the Catholic Monarchs, the Emperor Charles V and Alfonso XIII. The Spanish Royal Family continues to use it as accommodation when traveling to Sevilla.

The sumptuous Casa de Pilatos is currently owned by the dukes of Medinaceli although it was built by the Marquis of Tarifa. It´s that having been in Jerusalem, he wanted to reproduce the old house of Pilate in the city.

The City Hall stands in the Plaza de San Francisco. It has two facades, a plateresque of the 16th century and another neoclassical facade, the result of an expansion in 1891. Inside you can enjoy artworks works by great authors such as Velázquez or Zurbarán.

Apart from the historic places, Barrio de Santa Cruz is full of charm, joy and colours, a perfect place for a walk alone or with a goof company! If you´ve decided to spend few days in Sevilla you can always stay in our Luxury Apartments by BE APARTMENT in the centre, the best in the city.