Discover la Casa de les Punxes (the House of Spikes), a modernist residential house on Diagonal avenue close to our luxury apartments, known as a gothic Castle in the middle of Barcelona!" />

Visit the Barcelona House of Spikes 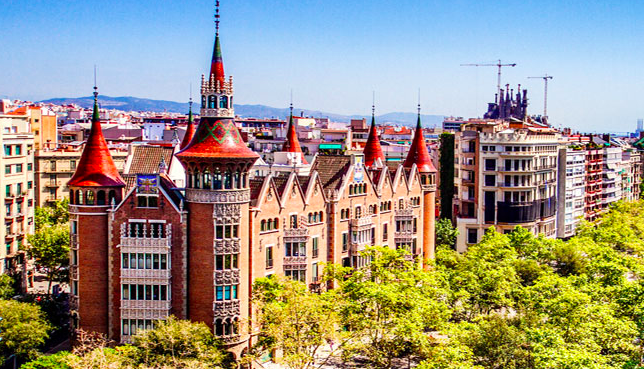 La Casa de les Punxes, literally translted as the House of Spikes is really a residential block built in the shape of gothic castle which is one of the most recognisable modernist landmarks on the Barcelona skyline. A so called large Gothic castle that stands in the middle of Barcelona on Avenue Diagonal catches the eye of anyone passing by. For a perfect vacation, BCN Apartment Rentals offers you the best luxury apartments in the heart of Barcelona, with the best design, location, security and comfort.

The history of La Casa de les Punxes is fascinating: Terradas sisters owned 3 buildings standing between the Diagonal Avenue, Rosselló street and Bruc street. Josep Puig i Cadafalch was commissioned to redevelop the buildings and linked them together on one site behind a vast brick facade. His project, which was completed in 1905, resulted in an imposing triangular structure which rises up like a grand gothic castle with 4 spikes, one on each corner. The bulding was named la Casa de les Punxes because of the conical roofs with spikes on top.

The exterior of la Casa de les Punxes delights anyone who comes to take a closer look. The brickwork on the facade blends with the wrought-iron on the balconies, the neo-Gothic style sculptural reliefs and stained-glass windows. The ceramic panels surmounting the façade refer to the patriotic symbols of Catalonia.

Discover la Casa de les Punxes, its design and legend that make it unique. You can visit it as a museum, a fabulous opportunity to delve into a fantastical world of knights, princesses and dragons! You'll also be able to visit the rooftop and enjoy amazing city views! La Casa de les Punxes is currently offering guided visits to show all the secrets of this modernist masterpiece and enjoy amazing views of the city. Do not miss the opportunity to enjoy Barcelona and get to know the city better staying in our luxury apartments by BCN Apartment Rentals.