On February 2, Barcelona celebrates the arrival of Chinese New Year with the whole city!" /> 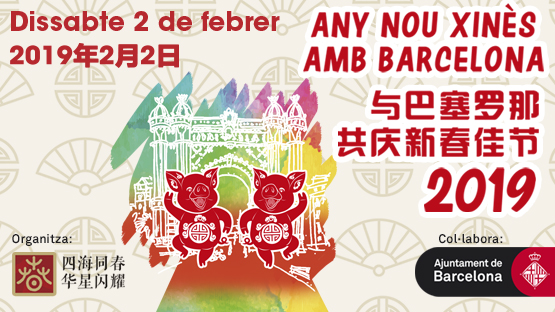 On February 2, Barcelona celebrates the arrival of Chinese New Year with the whole city! For a perfect accomodation, BCN Apartment Rentals offers you the best luxury apartments in the heart of Barcelona, with the best design, location, security and comfort.

Barcelona's Chinese community celebrates New Year on February 2, with the Pig as the animal protagonist this time, taking over the Dog in 2018. This is a moment that has a special meaning for the Chinese community in Barcelona, which numbers around 20,000 people! It is also a time for them to share their culture with the rest of their neighbors in the city. In fact, celebrating Chinese New Year has become consolidated as one of the Barcelona’s leading mass cultural events!

This year the Saint Anthony Pig occupies the place of honor in the Chinese New Year parade starting in Paral·lel which will be specially decorated for the occasion. It will be accompanied by other traditional figures from Chinese and Catalan culture including Rosa the Giant accompanied by her “special” friend Armand. Apart from the parade, there will also be a food and culture festival and a number of performances thanks to the involvement of 1,500 volunteers and over 60 Chinese and Catalan associations.

Barcelona wishes everyone a Happy Chinese New Year! Do not miss this opportunity to spend time in Barcelona, enjoy its proposals and get to know the city better with our luxury apartments by BCN Apartment Rentals.