BE APARTMENT offers you the best luxury apartments and the most elegant experience in Treviso and other European towns and cities, come and enjoy it with us! 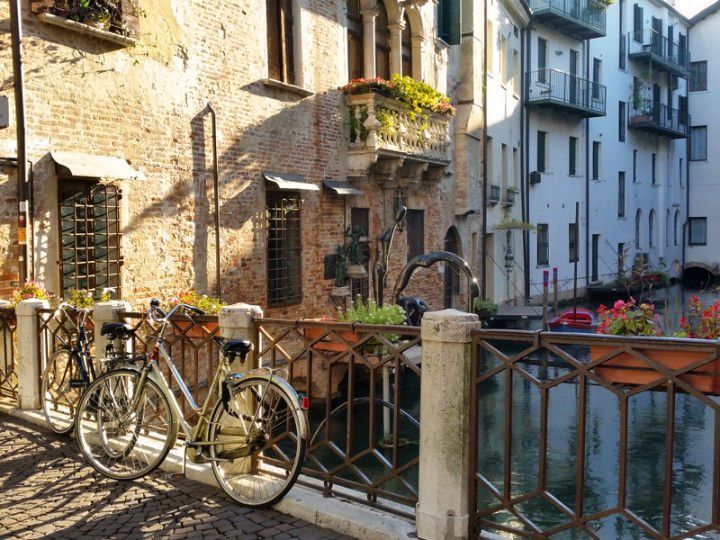 BE APARTMENT inaugurates a new destination with new luxury apartments! It´s in Italy, Treviso, capital of the province of the same name, is situated 20 kilometers north of Venice. It´s often called one of the "Little Venices" for its canals with buildings rising straight from the water, as well as for the distinctly Venetian lions on its gates. But you would never mistake Treviso´s vine- and flower-draped canals or its candy-colored buildings for Venice, even though a modern wall decoration depicts a gondola prow and gondolier. Treviso is an old-world town of narrow streets, many of them lined with arcades, and it is still surrounded by well-preserved 15th-century walls. The canals and walls make it a pleasant town to stroll through and admire the many frescoes decorating house façades. For an amazing stay in Treviso we offer you the most elegant Luxury Apartments that we have distributed throughout the city so you can enjoy comfort, design and security that BE APARTMENT provides you. Here is our guide on the main attractions in Treviso!

1 Cathedral and Museo Diocesano. The five-domed cathedral of San Pietro was built in the 15th and 16th centuries on the site of an earlier Romanesque church. Below it is the crypt of the original church, dating from the 11th and 12th centuries; the porch was added in 1836. To the left of the cathedral stands the Romanesque Baptistery from the 11th and 12th centuries, with 13th-century frescoes and a fine font. Portions of a mosaic floor from a paleochristian baptistery have been exposed on Via Canonica, where there is also the Museo Diocesano d´Arte Sacra di Treviso (entered through the cathedral), containing sacred art and archaeological finds.

2 City Walls and Gates. The well-preserved 15th-century walls that surround Treviso are not the first; it was a Roman city and the Romans fortified it from the earliest days. The River Sile flows alongside the walls, and together with the River Cagnan, it was used to further protect the town from attack. The waters were diverted into canals that encircled the city and were designed so they could also be used to flood the surrounding lowlands, making a siege difficult. The present walls, strengthened by earthworks, were built by the Venetians, as you can guess from the winged lions on the imposing gates. Treviso was Venice´s major stronghold protecting it from invasions from the north. Take time to walk the path alongside the river, or at least to see the three major gateways into the city, Porta San Tommaso, Porta Santi Quaranta, and Porta Altinia. From Porta San Tommaso, built in 1518 at the northeast corner of Treviso, you can walk along the northern rampart, where there are beautiful views of the Alps.

3 Museo Civico di Santa Caterina. The status - and location - of Treviso´s municipal museum has been the subject of some confusion for almost a decade, as its original building on Borgo Cavour has been undergoing a long (and some say endless) restoration. Happily, the contents have been moved to the Santa Catarina complex, which has been repurposed to display them. You will still see confusing references to the old location, but don´t be misled. The artistic highlights of the Museo Civico are the frescoes by Tommaso da Modena and Girolamo da Treviso, and paintings by Bellini, Titian, Lotto, Pisanello, and many other artists. The archaeological collections are also impressive and well displayed.

4 San Nicolò Church. At the southwest corner of the old town, the Dominican church of San Nicolò is a spacious Gothic church built in brick during the 13th and 14th centuries. It has round piers and an unusual vaulted timber roof, which has been restored. The frescoes in the chapterhouse of the former monastery are especially impressive. Wrapping around the room is a frieze of 40 fresco portraits of Dominicans by Tommaso da Modena, painted in 1352.

5 Canals and Water Mills. Two rivers encircle Treviso, and in addition to their confluence here, their waters have been contained into a series of canals and tiny waterways that wander beautifully through the city. Houses rise directly from their water and it flows under the arched foundations of others. Every bridge reveals another vignette of balconies above the water. Adding to all this is an occasional waterwheel, remnant of those that once drove mills throughout the city. You´ll see them as you walk around Treviso, but there is one quite near the Pescheria, the fish market.

6 Pescheria (Fish Market). One of the oldest and least changed quarters in Treviso includes the colonnaded buildings of the Buranelli and the convent of the Camaldolese nuns. Until the mid-1800s, there were three small islands in its midst, where fishermen from Burano brought their fish to sell. Then the 3 islands were joined, and a proper fish market was built on its own little island. Surrounded as it is by elegant old buildings, this bustling morning market is one of the city´s most atmospheric sights. Recently some incongruous, but attractive contemporary sculptures of fish and a mermaid have been added in the river.

7 Piazza dei Signori. In the center of Treviso is the picturesque Piazza dei Signori with the Palazzo dei Trecento, built in the late 1100s and once the seat of Treviso´s government, and the 15th-century Palazzo del Podestà with the tall Torre del Comune. The Palazzo Pretorio, a Renaissance palace, now houses the town council. Between Piazza dei Signori and Piazza del Duomo runs Via Calmaggiore, Treviso´s main street, lined by fine 15th- and 16th-century houses. Although only 3 blocks long, it has a number of buildings with decorated facades and lunettes above their arched doorways.

8 San Francesco Church. The mix of Romanesque and Gothic features in this church hints at its origin in the 13th century when Gothic was beginning to replace the older, heavier Romanesque. History has not treated the church kindly. Like many others in Treviso, it was commandeered by the French army when they took control of Venice and Treviso in 1797, robbed of its art, and used as a military storehouse. The monastery was demolished and it was robbed of its cloisters, and a house was built with the bricks of two cloisters. The church floor was removed and the interior divided into several floors to create more storage space. What´s amazing is how much has survived. Inside the restored church is the 1364 tomb of Dante´s son, Pietro Alighieri, a coffered timber ceiling, and in the altar to the left of the main altar, a Madonna and Child with the saints painted by Tommaso of Modena.

Treviso is a tranquil oasis where a peaceful walk lets visitors admire the elegance that characterizes every corner of this charming “città cortese”. Do not loose the opportunity to enjoy Treviso and learn more about it! If you´ve decided to spend few days in the town you can always stay in our Luxury Apartments by BE APARTMENT, the best luxury apartments in the town.