A tour in la Giralda Sevilla

What to see in Sevilla? 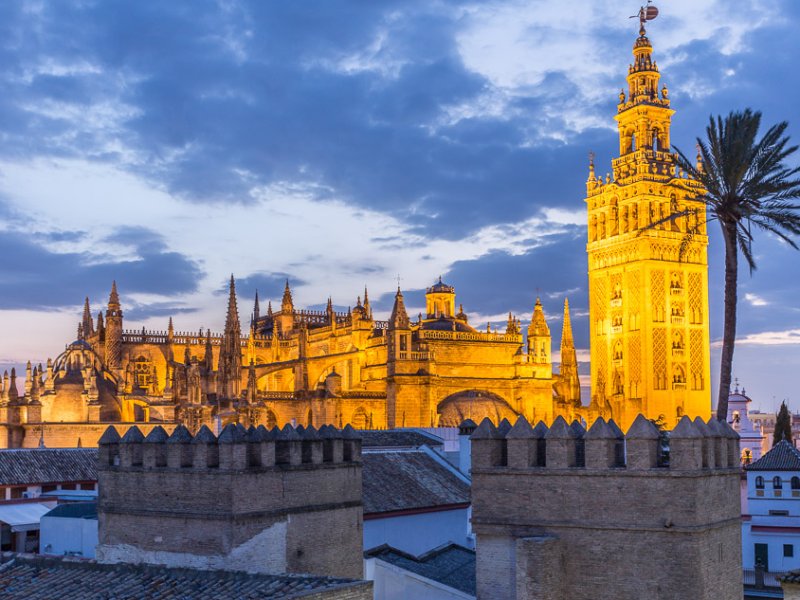 La Giralda is one of the most privileged watchtowers that Sevilla has, par excellence also one of the city symbols. Recognizable throughout the world, its silhouette has inspired many works of art and even similar monuments, making it quickly recognizable. For an amazing stay in Sevilla we offer you the most elegant Luxury Apartments that we have distributed throughout the city so you can enjoy comfort, design and security that BE APARTMENT provides you.

La Giralda is the emblem of Sevilla, unmissable for any visitor, it deserves a calm and contemplative visit that allows to enjoy both its exterior and interior. It is a part of the cathedral, which gives luste to one of the most beautiful bell towers in the world. It was back in 1182 when the Almohad tower was inaugurated, which was inspired by its previous twins of Rabat and Marrakech, still existing nowadays. The Arab style of the monument is undoubted. You will see the magnificent exterior decoration of la Giralda with the characteristic work in diamonds or sebka, which is an ornamental Arab motif, forming rhomboidal figures and inspired, apparently, in textile motifs or the silhouette of the mountains. With the Christian reconquest, arrived the new architectural look of la Giralda, incorporated in the 16th century. The bell tower of what became the cathedral of the city, topped by the sculpture that represents the triumph of faith, which today is popularly known as the Giraldillo.

La Giralda is a unique monument in the world that represents historical evolution of the city that houses it. You will enjoy its combination of Roman, Arab and Christian elements. Roman architectural elements from the nearby Itálica ruins were used for its construction. Originally, it was conceived as a tower of the main mosque of the Almohad Sevilla. Now it´s a iconic part of the city landscapes that atrracts millions of visitors! If you´ve decided to spend few days in the city you can always stay in our Luxury Apartments by BE APARTMENT in the centre of Sevilla, the best in the city.