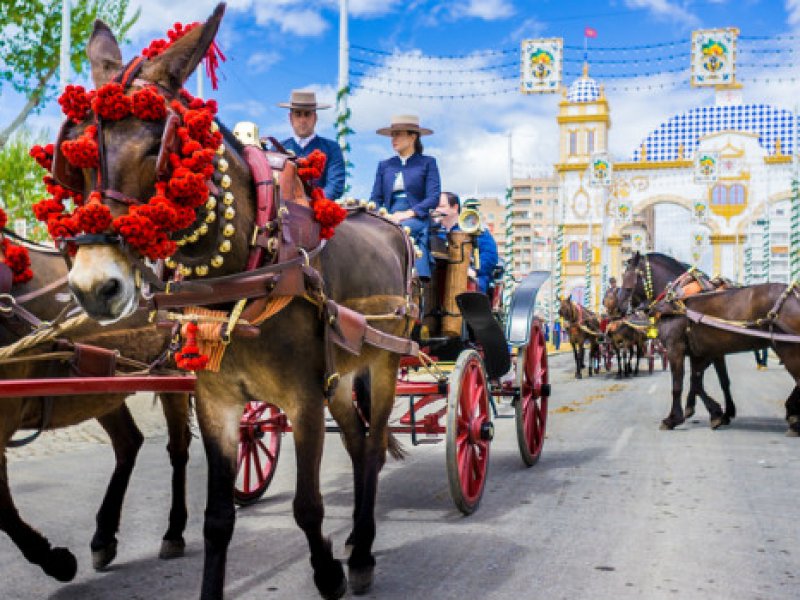 April Fair or Feria de Abril in Sevilla, the most anticipating event in Andalusia and whole Spain, is welcoming you from April 15 to 21, lasting 2 weekeends just like every year. The April Fair will start on Saturday, April 14 at midnight with the traditional lighting and will end just a week later, on Saturday, April 21 at midnight with the launch of fireworks. For an amazing stay in Sevilla we offer you the most elegant Luxury Apartments that we have distributed throughout the city so you can enjoy comfort, design and security that BE APARTMENT provides you.

Two weeks after the processions of Semana Santa finish, Sevilla once again will be filled with color, music, and culture due to the Feria de Abril. Meant to celebrate the arrival of spring, similar fairs are held all over the country during the early days of the blossoming season. Nevertheless, Sevilla is the undisputed queen of them all. The 1st night of the April Fair starts with el Alumbrao, the brilliant lights adorning the fairgrounds and the massive main gate being switched on for the first time of the year, marking the beginning of the week of dancing, music, and basking in the colorful Sevillian culture. April Fair also sees the best bullfights of the season, so be sure tofollow the Sevillians to the Maestranza bullring.

Entering through the towering gate into the festive realm of the Feria de Abril you'll see over 1000 striped casetas (tents) lining both sides of the streets. These tents are a part of the tradition of the April Fair and give the celebration its particular color. Owned by groups of friends, families, organizations, or political parties, they serve as miniature house, intimately decorated and equipped with a kitchen, a bar, and tables and chairs to enjoy tapas and wine. The April Fair tents are white with red or green stripes and there are 2 types, private and public. There are more than 1000 tents installed in El Real and only 20 are public and freely available, to enter the private casetas you will need an invitation.

The music coming from each tent during the Feria de Abril are sevillanas, 4-part songs with accompanying 4-part dances that many Sevillians begin to learn as kids. Women dressed in polka-dotted flamenco dresses with red colro predominating, men on horseback donning traditional clothing of Spanish farm-workers, and groups of people on adorned horse-drawn carriages make the April Fair´s atmosphere unique.

The populars drink at Feria de Abril are rebujito, a cocktail made of Manzanilla wine and Sprite, and Manzanilla of Sanlúcar and Fino sherry wines alone. The food includes sausages, gazpacho, salmorejo, spanish omelette, stewed vegetables with peas and meat and obviously the traditional "pescaito frito" of fried fish. For breakfast are usually eaten churros or buñuelos with chocolate.

The Feria de Abril was not born as the sensational celebration we see today, it started as a cattle. It began in 1847 as a livestock and agriculture fair, evolving over the years into a purely Sevillian tradition. The tents, which eventually led to the casetas, served to keep you away from the scorching sun, and small food stands slowly began getting bigger at the fairgrounds. Eventually, the livestock stalls phased out and the April Fair began to turn more and more into an occasion to eat, drink, dance, and have a great time. As a result, the fair grew exponentially over the years, to the point where the original fairgrounds just weren't big enough. These days, the April Fair of Sevilla is one of the most anticipaiting events in the whole county!

The April Fair usually finishes with a bang as fireworks launch into the sky of Sevilla! If you´ve decided to spend few days in Sevilla you can always stay in our Luxury Apartments by BE APARTMENT in the centre, the best in the city.