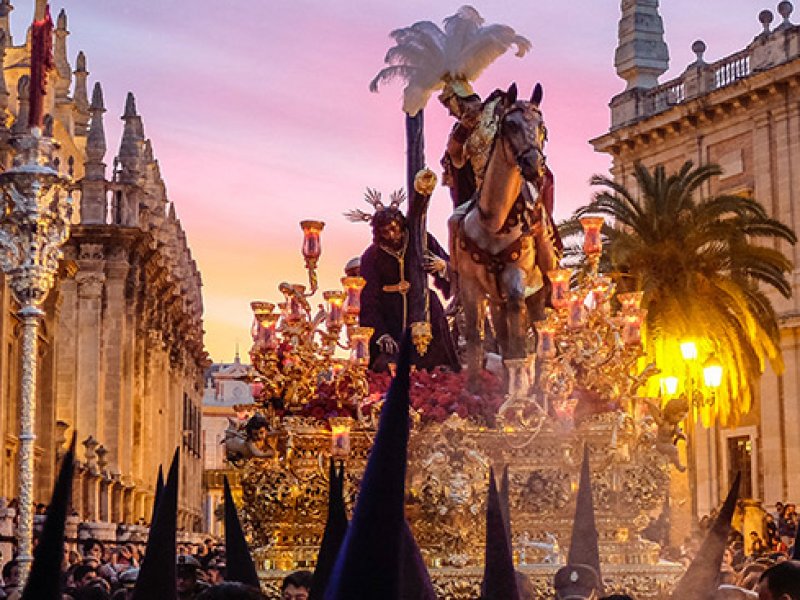 Next week, from March 25 to April 1, Sevilla holds one of the most important national holidays: Semana Santa or Holy Week, famous for its processions and traditions. Check out our article to learn more!For an amazing stay in Sevilla we offer you the most elegant Luxury Apartments that we have distributed throughout the city so you can enjoy comfort, design and security that BE APARTMENT provides you.

Sevilla has been holding its Easter Week celebrations since the 16th century, and they have become universally famous. During the Holy Week, around 50 thousands people put on traditional robes to parade in the 58 organised processions, while the "costaleros" carry the pasos (religious statues) on their shoulders. There are processions in the evening and at night every day. Each brotherhood sets out from its church and has an organized route, although they must all pass the so-called “official section”, which starts on Campana Street and finishes passing through the Cathedral. Once each procession has left the Cathedral, it returns to its church on a different route to that followed on the way out. The "saetas" are very emotional moments of the processions: these are flamenco songs, recited a cappella from the balconies in honour of the statues! These celebrations are famous for their statues of the Virgin Mary with canopies: they are Baroque statues with silver and gold crowns, embroidered cloaks and velvet tunics which only reveal face and hands The early hours of Good Friday constitute the most important time of the Sevilla Holy Week celebrations. That night, some of the most venerated statues make their way through the streets. Easter week is one of the most spectacular and emotional holidays all over Spain and most of all in Sevilla. Religious devotion, art, colour and music combine in the processions.

In any case, the best option during the Holy Week in Sevilla is always to walk. The best way to see the processions is on small narrow streets, but make sure to arrive before the brotherhood does and wait for it.  Another recommendable place, is la Plaza de la Encarnación. The contrast between the contemporary architecture of the "mushrooms" and the Baroque staging is spectacular and utterly instagramable.

An important activity on Sevilla Holy Weekis visiting the churches in the mornings. It is a fabulous way to se architecture, carvings, flowers up close. The temples are found in all the neighborhoods and areas: some essential ones are El Gran Poder, La Magdalena, the Cathedral or those of La Esperanza Macarena and La Esperanza de Triana. They are a legitimate excuse to get to know the city. A basic one is to visit the baroque Salvador church, that keeps some of the most interesting carvings of Holy Week. At the end of the visit to the church you can order a cold beer in one of the arcade bars and drink it in the middle of the square. Do not look for tables or chairs: here you eat and drink upright!

If you´ve decided to spend few days in Sevilla you can always stay in our Luxury Apartments by BE APARTMENT in the centre, the best in the city.