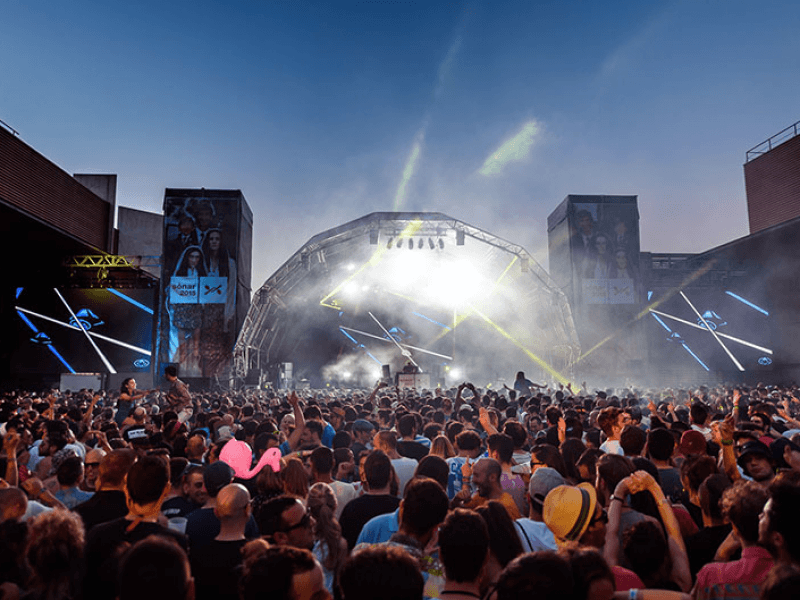 BE Apartment offers you the most unique experience in the best luxury apartments in Barcelona and other cities, for your security, pleasure and comfort.

The Sónar Festival started out in 1994 to be something more than just another music festival. Yes, it would feature live performances, all grouped together broadly under the electronica umbrella, but its founders wanted to push the boundaries beyond the experience of just being an audience member at a concert. Electronic music, the current avant garde of modern music, is constantly morphing. Consider that there are dozens of primary categories: Industrial, hardcore, electronica, ambient, breakbeat, drum and bass, disco, and house, to name a few. And underneath those are hundreds of subgenres and sub-subgenres: space disco, ethnic electronica, hardstep, eurobeat, acid house, dubtronica, speedcore, and, well, you get the picture.

At its core, Sónar is divided into 2 primary parts: Sónar Day and Sónar Night. Sónar Day part takes place at Barcelona’s Plaza d’Espanya, an historic public square built for the 1929 International Exposition and one of the primary venues for La Mercè festivities. The plaza is where you’ll see all the major headliners performing on stage during the day. Sónar Night is held primarily at the exhibition center in the L’Hospitalet neighborhood, but also holds events throughout that neighborhood and greater Barcelona. Sónar Night is where you’re most likely to catch up-and-coming (think Baauer) or well-established (think Diplo) DJs spin set in smaller venues.

More than the just the usual line-up of musicians (and each year, it’s a truly spectacular line-up), the Sónar Festival aims to immerse attendees in every aspect of electronic music, hybridizing a festival experience with elements of trade shows, professional conferences, and the classroom. Sonar+D is the professional side to the event (this was formerly known as SonarPro, but all the non-performance events were rebranded in 2013). Musicians, producers, stage directors, hardware and software manufacturers, and more gather for workshops, demonstrations, hands on sampling, and even TEDx talks. Attendance typically falls within a few thousand, which is pretty good for a trade-show.

Families are by no means excluded with the recent addition of Sónar Kids. Activities here run from day-long supervised LEGO building tents, musically enhanced skate parks (complete with a ramp connected to a synth so each run produces sound; instructors are on site), and full immersion on-stage performances where kids learn about all the technology that goes into a show (including visuals, instruments, and mic work).

Among more than 150 performances scheduled there is French duo Justice, called the current French house, which will present their new audiovisual show on the occasion of the group´s latest album, ´Woman´ (2016). There will also be Nicolas Jaar, the consenting child of the electronics that also will act in direct; a spectacular live-act of Moderat, the group formed by Modeselektor and Apparat; the absolute kings of American hip hop, De La Soul, who will present their first album live in 10 years. You will see Anderson Paak, the new sensation of the current black music, nominated to two Grammys by his celebrated CD ´Malibú´, that will present live accompanied by its band The Free Nationals; The unclassifiable musician and producer Arca, who has chosen Sónar as the only festival in the world to present his new work live; DJ Shadow, whi reappears after 6 years; The Belgians Soulwax, a band of the brothers Dewaele (2manydjs).

The Sónar will exclusively present the European debut of a new project of the revered Carl Craig, Versus Synthesizer Ensemble, which includes a group of high level musicians, with the pianist Francesco Tristano; The composer Nico Muhly will visit the festival inside the showcase of the Icelandic Sealant Bedroom Community to celebrate its 10th anniversary. There will also be space for techno without concessions by Nina Kraviz; renovated and fresh house by The Black Madonna; advanced hip hop by Clams Casino; a double show (at Sónar Village Friday and at Sonar Pub Saturday) by Fat Freddy´s; Cashmere Cat´s lucid pop; melodic tech-house by Damian Lazarus. As for the most experimental part stands out the innovative technological and audiovisual show of American producer Nosaj Thing with Japanese Daito Manabe;  Asturian LCC will present new album. There will be concerts by Forest Swords or GAIKA, one of the most powerful artists coming from the prolific London scene.

In addition, the new trends in music from the internet will also have a great presence in this edition with the sets by Stook Sound or Nadia Rose, new representatives of British urban music, The Los Angeles Soulection Group; The New MC Tommy Cash, an authentic mass phenomenon; and the National Trap of the Bad Kinder ancestor & Skinny Pimp. The latest news is that the Icelandic artist Björk inaugurates this year´s edition of Sónar with one of its very exclusive DJ sets! It will do so at the Sónar Hall of the Fira MontjuÏc in a performance where an extra ticket is required.

Do not miss this opportunity to enjoy Barcelona and get to know the city better with BE Apartment. Spend a few days in Barcelona staying in our luxury apartments that we have throughout the city.