Until April 6, the Mirador de Colom in Barcelona holds a photography exhibiton "Vincles BCN" that is totally worth visiting!" /> 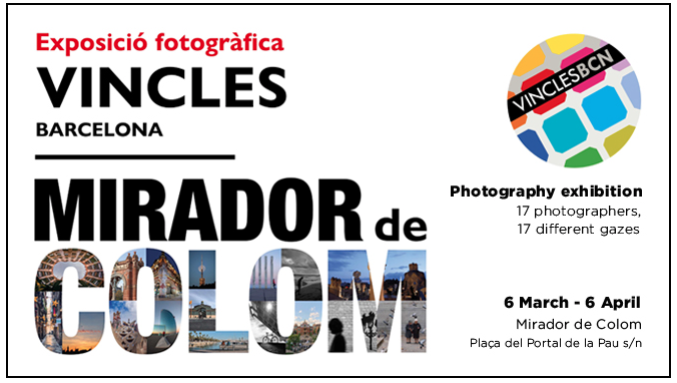 Until April 6, the Mirador de Colom in Barcelona holds a Photography exhibiton "Vincles BCN" that is totally worth visiting! For a perfect accommodation in Barcelona, BCN Apartment Rentals offers you the best luxury apartments in the heart of the city, with the best design, location, security and comfort. The Columbus Monument and the Mirador de Colom is hosting the Photography exhibition "Vincules BCN" which can be translated as "Barcelona Connections". You will find 17 photographers who have met on Instagram through their passion for photography, capturing the world through their camera lenses. Each one has their own distinctive style and gives us their own personal take on Barcelona through a selection of photographs: you will see the streets and squares, people, places that everyone knows and some hidden city gem.

The statue of Christopher Columbus is one of Barcelona’s most emblematic ones! At the crossroads between La Rambla, Passeig de Colom and the Port de Barcelona, this monument in honour of the man who discovered America was inaugurated for the 1888 Universal Exposition, to redesign the Barcelona port and coastline. A 60m high column and 233 tonnes of iron make up the pedestal for the 7m tall statue. Its outstretched arm and the pointing finger are part of the city’s urban legends. What is really impressive is the tower’s viewpoint called Mirador de Colom, where you get to via an internal elevator. The 360º panoramic views of Barcelona allow you to see the Gothic Quarter to the north, with its historical buildings like the cathedral and Santa Maria del Mar, Las Rambles and even the domes of the Sagrada Família. On the south you can see Montjuïc mountain and the Olympic Ring. On the east, you can see the Fòrum and the towers at the entrance to the Port Olímpic, even Frank Gehry’s golden fish and if you look to the West there is the magical mountain of Tibidabo.

The square where the Mirador de Colom tower is located is called Portal de la Pau, and it is a memorial to the end of the 2nd World War, but the fame of the explorer’s statue is so great that the square has lost its real name: everyone knows it as Plaça Colom. Do not miss this opportunity to spend time in Barcelona, enjoy its proposals and get to know the city better with our luxury apartments by BCN Apartment Rentals.