A neighbourhood with a long history 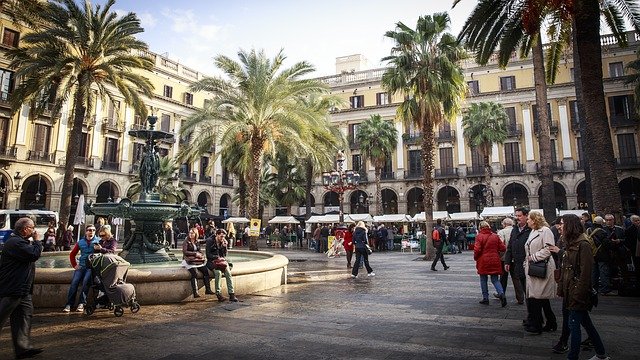 The beautiful neighbourhood known as Barrio Gótico is the oldest part of the city and used to be the Roman town. The structure of the neighbourhood remained intact until the 19th century, a period that brought with it great transformations in the structure and morphology of the neighbourhood, such as the transformation of the parish cemeteries into public squares, the emptying of large buildings with the consequent change of use, or the demolition of the walls. Today, pieces of the first wall are still preserved in the Plaza de la Seo, in front of the cathedral of Barcelona.

The Barrio Gótico is a charming neighbourhood with narrow medieval streets lined with trendy bars, pubs and Catalan restaurants. The remains of the Roman city are on display at the Museu d'Història de Barcelona.

It has an infinite number of points of interest, but today we will focus on 5 of them:

Cathedral of Santa Eulalia: Also known as La Seu, the Cathedral of Barcelona is a famous example of Catalan Gothic architecture that dates back to the 14th century.

Plaza Sant Jaume: The political centre of Barcelona, this is where the City Hall and the Palace of the Generalitat of Catalonia are located.

Plaza Real: Located next to Las Ramblas, this surprising neoclassical-style square is one of the most pleasant and lively in the area. It is a well known square for its nightlife and for the many bars and restaurants you can find.

Plaza del Rey: home to the Royal Palace since the early Middle Ages, it houses a group of medieval buildings that are home to part of the City History Museum. The museum includes interesting excavations that allow the visitor to get to know the city from its Roman foundation in the 1st century BC to the Barcelona of the Middle Ages.

Calle Portal de L'Angel: This is one of the most pleasant and complete shopping streets in the city.