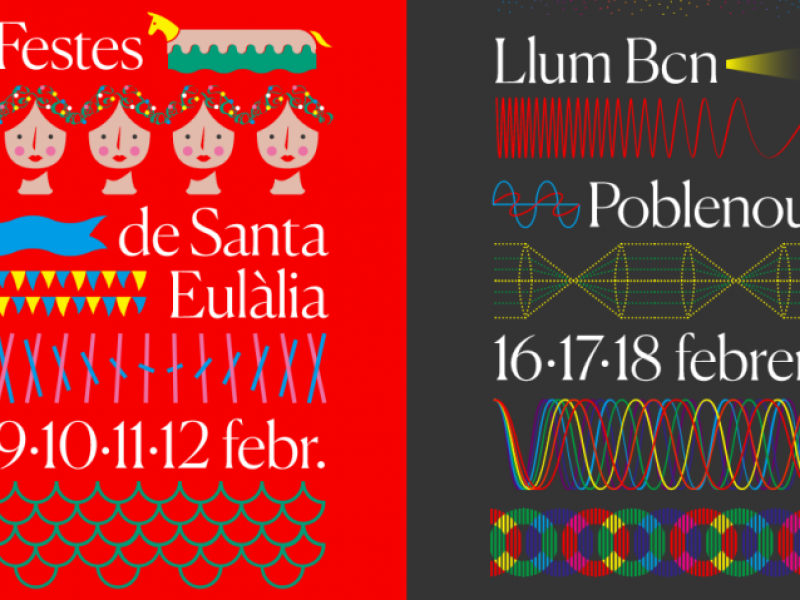 The Winter Festivities of Barcelona are arriving! Les Festes de Santa Eulàlia (Santa Eulàlia Festivities) have their origin and the legend of the second patron saint of the city. This year the festival is divided in 2 different weekends: from February 9 to 12 you can enjoy the festivities itself. From February 16 to 18 you will see Llum BCN, festival of light that reaches the 7th edition. For perfect holidays, rent apartments around the world with Homes in Blue, here you can find the best apartments in Barcelona and other cities, for your security, pleasure and comfort.

Les Festes de Santa Eulàlia, also known as Laia or Barcelona´s big winter festival, are held every year around February 12 around the city. It is a festival of small format, full of very diverse popular culture activities for all ages. The most important events include "les Laies" procession, the retinue of Santa Eulàlia, human towers "castellers",  sardana dances and correfoc, with the participation of traditional beasts, bonfires and devils, large and small. You can enjoy the activities of Festes de Santa Eulàlia in Ciutat Vella, mostly at Plaza Sant Jaume and in front of the Cathedral.

Les Festes de Santa Eulàlia represent a reencounter of the city with traditional popular culture. You will see the solemn Protocols de l´Àliga, you will inaugurate the season of the castellers, you will enjoy the gegants in the heart of the city and you will live the crazyness of the correfocs. Another emblem of the Catalan culture, les mulasses "the donkeys", will also be protagonists of Festes de Santa Eulàlia with an exhibition that will mark the 450th anniversary of Mulasses in Barcelona. Among many activities, we can also highlight a medieval popular dance show where everyone can participate. This year Llum BCN moves to the neighborhood of Poblenou, the weekend following the Festes de Santa Eulàlia. More than a dozen recognized artists of national and international scope will present their light shows.

Les Festes de Santa Eulàlia pay homage to Santa Eulàlia, patron saint of the city until the 17th century. The legend explains that in the epoch of the Roman emperor Diocletian, in the 4th century, it was ordered that all Christians in the empire would be persecuted. In Barcelona, ​​many hid and a few fled. Eulàlia, a 13-year-old girl who lived in a farmhouse in Sarrià, showed great courage in presenting herself to the Dacian consul to rebel against such unjust acts. Eulàlia was imprisoned and punished, but she did not let herself be defeated and she fought so hard for her ideals that they ended up costing her life. Since then, that girl became a symbol of solidarity and defense of justice and is still venerated by the people in Barcelona. Do not miss this opportunity to enjoy Barcelona in the winter and get to know the city better with Homes in Blue!